Not long ago I had the pleasure of visiting Toyota Technical Institute in Chicago.
I had some interesting meeting with Joseph Keshet. We discussed what is the best way to
deploy large scale kernel SVM.

According to Joseph, linear SVM is a pretty much solved problem. State of the art solutions
consists Pegasos and SVMLight see Joachim 2006.

Recently, Joseph have worked on large scale SVMs in two fronts: GPU and MPI.
The GPU kernelized (not linear) can be found here. This paper appeared in KDD 2011.
Here is an image depicting nice speedup they got: 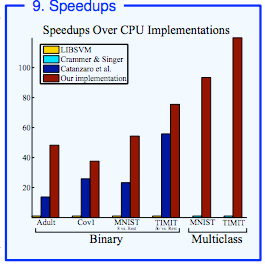 Email ThisBlogThis!Share to TwitterShare to FacebookShare to Pinterest
Labels: SVM