I am very excited to report a recent meeting of Graphlab team with Joel Welling from Pittsburgh Supercomputing Center. We are in the process of porting GraphLab to BlackLight platform, a 4,096 cores supercomputer with 32TB of shared memory.

Currently, a preliminary mullticore version of GraphLab was ported to BlackLight by Joel Welling, for using the CoEM NLP algorithm. I applied for an account, and I can't wait to be approved and play with GraphLab on this machine. Not everyone gets an opportunity to run on a 2.8M$ machine..

The GraphLab team is planning to participate in PSC Data Analytics Symposium April 14,15 Pittsburgh. Anyone who is planning to be there and interested about GraphLab is welcome to meet us.

I plan to experiment with PMF matrix factorization algorithm and report the results here.
Posted by Danny Bickson at 6:01 AM No comments:

Recently I learned from Sean Owen about this year Yahoo! KDD Cup

In track1, the task is to predict user music recommendations. There are about 1M users, 600K music titles, and about 252M non-zero ratings in the training data. (To compare to Netflix, there where only 50K users, 500K movies and about 100M non-zero ratings). Unlike Netflix, the ratings are between 0-100 (and not 1-5). In matrix factorization context, need to think how to represent a rating of zero vs. non existing rating.

For a start, I have tested GraphLab matrix factorization data with the track1 dataset. On an 8 core machine (2x4 cores Intel Xeon 2.67 Ghz) each alternating least squares iteration takes around 150 seconds. After 10 iterations I get training RMSE of 21.7 and validation RMSE of 22.5.

For reader's requests, I have posted some more detailed instructions on how to run GraphLab on KDD Cup data here

Here is the output of the GraphLab program:

I wrote a simple Matlab script to parse the text input files into sparse Matlab matrix. Here it is: 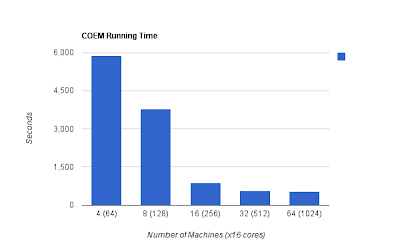 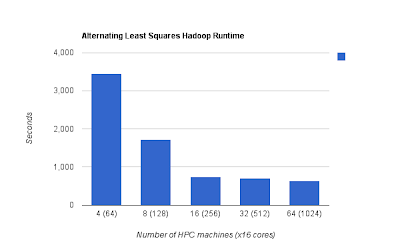