A couple of days ago, I got this phishing message on Linkedin 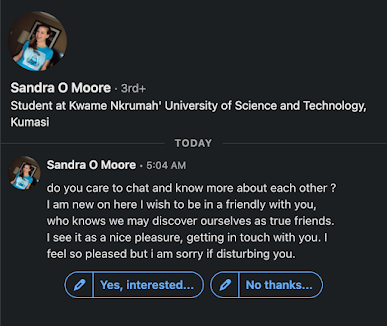 The English is pretty bad and the location of the person in Africa makes it suspicious. It immediately jumped to my mind that this is a great opportunity to test reverse image search capabilities to check the legitimacy of the sender.
Starting with Microsoft Image search I got this non helpful answer:

Namely similar poses but wrong persons.
I used Yandex image search and get the following:

The first hit is exact match for someone named Sarah Benson's instagram page: 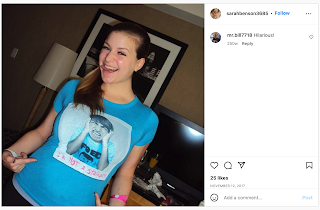 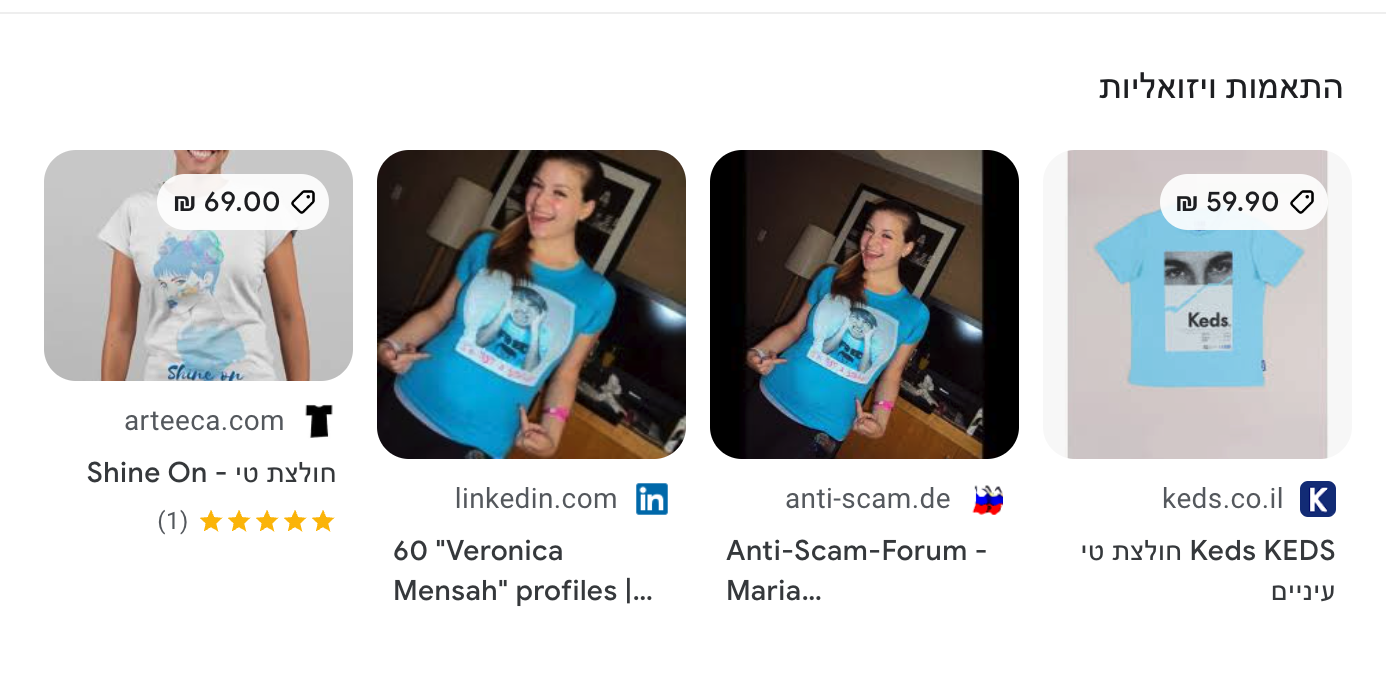 A combination of two ads, two correctly returned results, one Veronica Manesh and one anti scam forum Maria Zabrash (which points to non existing Facebook page).
I also tried Baidu reverse image search but i wasn't able to get it to work at all.
Overall it seems super easy to find the same persons image in multiple accounts assuming different names. I wonder why LinkedIn has no profile checking to make sure the image is legit?
Next I tried to search for this not real English text of "I see it as a nice pleasure, getting in touch with you". I found it in many places on the web mainly in dating sites featuring African woman and also in some scam warning sites. Again it took me a couple of seconds to find many sites that should have ring the alarm bells.
To conclude it seems there is zero effort from LinkeIn side to filter scam. In terms of the best reverse image search I often find Yandex to work better than the others.

Posted by Danny Bickson at 8:55 AM No comments:

Large Image Datasets Are a Mess!

Here is my latest blog post on medium: https://medium.com/@amiralush/large-image-datasets-today-are-a-mess-e3ea4c9e8d22

Posted by Danny Bickson at 8:24 AM No comments:

I found this cool YC21 Belgian small startup called segments.ai. It seems they have a good technique for automating manual tagging process:

Posted by Danny Bickson at 11:52 PM No comments:

Having fun with Macaw - or - Dinosaurs meat is sour!

Following the announcement from Prof. Oren Etzioni about their new Macaw NLP model which should be up to 10% better than OpenAI's model, I spent a fun afternoon playing with the released model.

So far 3 models have been released: large, 3b and 11b. Documentation says large is a lightweight model (indeed a good naming convention here) and should not be fully trusted, the other ones are 3b (medium) and 11b (the big one).

I started with the large model and my conclusion that besides solving the demo question about the sky's color, it is completely non functional.

To summerize since the model is so often wrong, it would help to get an additional confidence estimation that tells you that the answer is most likely junk.
After getting familiar with the small and weird model I moved to the medium model and continued to have fun there.
To conclude some answers are totally correct and some answers are totally hilarious. Maybe one should invent a don't know answer where the confidence is very low give it instead.
The handling of keyword names is a bit weird, for example Iraq with capital letters but new york and al qaeda without. I wonder if there is a post processing the puts some named entities as capital letters?
In terms of running time the models are pretty slow. It take s a couple of minutes on the latest Mac M1 to get an answer.
I will next try to test 11b model, it is 40Gb and thus slooooow to download locally.
Posted by Danny Bickson at 8:31 PM No comments:

The results are pretty cool. The level of improvisation is pretty good but I hear a little awkwardness in the timing of the notes.

Posted by Danny Bickson at 8:54 PM No comments:

My friend Sagie Davidovich, CEO SparkBeyond,  has shown me the following amazing demo:

SparkBeyond crawled hundreds of billions of Internet pages, papers, patents and social media site to build one of the largest available knowledge graphs. Based on this data it is possible to ask natural language questions about the knowledge and get aggregated knowledge summary. Unlike Google search where you have to manually go over of zillion resources here the data is summarized and aggregated visually. It is possible to understand reasons, trends, ask for follow up questions and see supporting evidence and statistics.

Unlike the typical language model which gives you a summary without knowing where the data was obtained from, In SparkBeyond;s model it is possible to get detailed references show where is the answer coming from.

An interesting related work is Colbert from Prof. Matei Zeharia. Intead of memorizing the full language model using hundreds of billions parameters a significantly smaller index is maintained that retrieves the relevant information on the fly,

Posted by Danny Bickson at 10:37 PM No comments:

Colossal - The Future of DNA Editing?

I found some recent news about Colossal a new startup that wants to revive extinct Mammoth to fight the global warming. Fighting global warming is one of the best things we can do, especially that one of the co-founders is Prof. George Chruch from Harvard Medical School, a very credible authority on gene editing. Church  is one of the inventors of Crispr, a gene editing tool that can cut and paste any desired segment of the DNA and thus make whatever changes we like to do.

Here is my take on it:

I wonder why all the news and media attention ignores the actual use cases of this tehnology?
Posted by Danny Bickson at 9:04 AM No comments: