A couple of days ago I had an interesting introductory talk with Steven Hillion, VP Product in Alpine Data Labs. Alpine Data Labs is a Greenplum spin-off, based on some cool data analytics research initiated by my postdoc advisor Joe Hellerstein from Berkeley. You can learn some more about this research here.

So what is interesting about Alpine? This is one of the only companies I am aware that worries about the feature engineering BEFORE the data is actually fed into the analytics engine. They have a product which is called data miner which allows faster mining of the relevant data from the database. Here is a video with a demo:
Second, the MadLIB idea is to run the analytics on the actual database where the data is stored for faster processing. My guess this is useful for the rather simple algorithms.

Anyone who is interested in learning more about Alpine and its products is welcome to attend our first GraphLab workshop.
Posted by Danny Bickson at 10:12 PM No comments:

I got the following from both JustinYan, and Nimrod Priell in parallel. Xavier Amatriain has published some information about Netflix recommendation engine in his blog post: part one and part two.
According to Xavier, the best performing algorithms in the Netflix context where SVD and RBM (both of them implemented in our GraphLab collaborative filtering library):


We looked at the two underlying algorithms with the best performance in the ensemble: Matrix Factorization (which the community generally called SVD,Singular Value Decomposition) and Restricted Boltzmann Machines (RBM). SVD by itself provided a 0.8914 RMSE, while RBM alone provided a competitive but slightly worse 0.8990 RMSE. A linear blend of these two reduced the error to 0.88... we put the two algorithms into production, where they are still used as part of our recommendation engine.


Now it is clear that the Netflix Prize objective, accurate prediction of a movie's rating, is just one of the many components of an effective recommendation system that optimizes our members enjoyment. We also need to take into account factors such as context, title popularity, interest, evidence, novelty, diversity, and freshness. Supporting all the different contexts in which we want to make recommendations requires a range of algorithms that are tuned to the needs of those contexts.

So, what about the models? One thing we have found at Netflix is that with the great availability of data, both in quantity and types, a thoughtful approach is required to model selection, training, and testing. We use all sorts of machine learning approaches: From unsupervised methods such as clustering algorithms to a number of supervised classifiers that have shown optimal results in various contexts. This is an incomplete list of methods you should probably know about if you are working in machine learning for personalization:


If you are interested in learning more, you are invited to our GraphLab workshop where Xavier will give a talk about Netflix recommendation engine. I must say I am a bit disappointed since I would by happy to learn in some more details about the algorithms deployed and which one Xavier finds more useful - but I perfectly understand why he does not want to reveal their secret recipes..

I got the following from Nimrod Priell as well. A lecture in FourSquare describing their Hadoop stack.
If I got it correctly, it seems they are using item-item similarity matrix for recommendations. A second lecture about large scale machine learning in twitter. If you like to stay on top of things, I recommend subscribing to Nimrod's weekly digest.

Last, I got from Sebastian Schelter, a key Mahout contributor the following:


We submitted a paper to this years ACM RecSys which details some of Mahout's collaborative filtering algorithms, in which we also cite GraphLab as a potential solution for the distributed execution ofiterative algorithms. The title is 'Scalable Similarity-Based Neighborhood Methods withMapReduce'.

Once Sebastian paper is published online I will link to it.


Posted by Danny Bickson at 2:45 AM No comments: 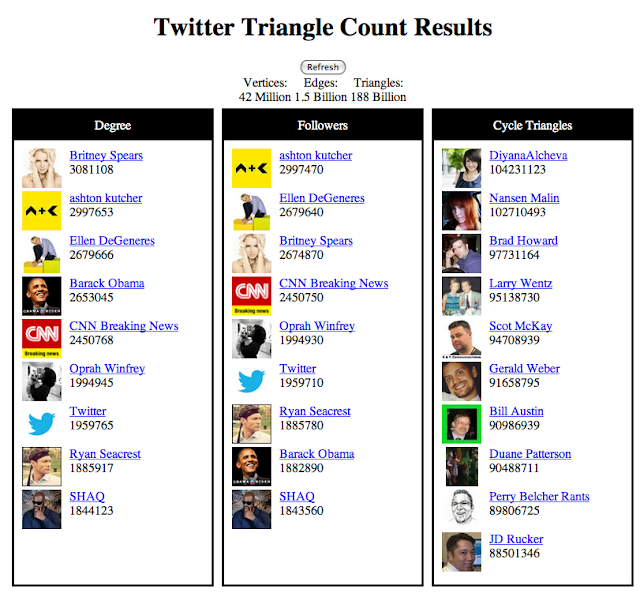 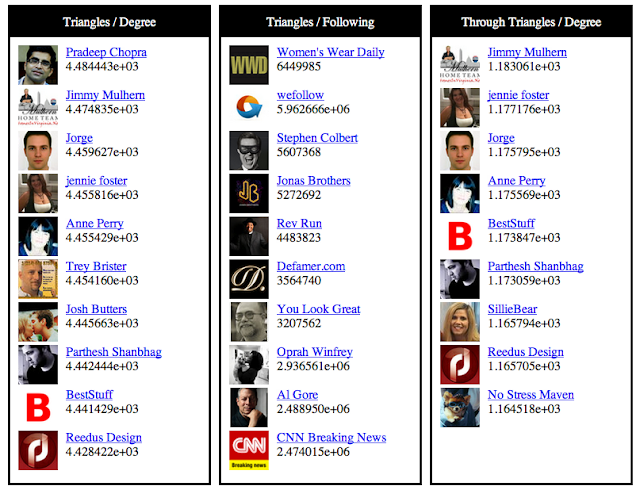 Posted by Danny Bickson at 10:36 PM No comments:

GraphChi - out of core graph computation on mac mini

Here is a nice image I got from my collaborator Aapo Kyrola: 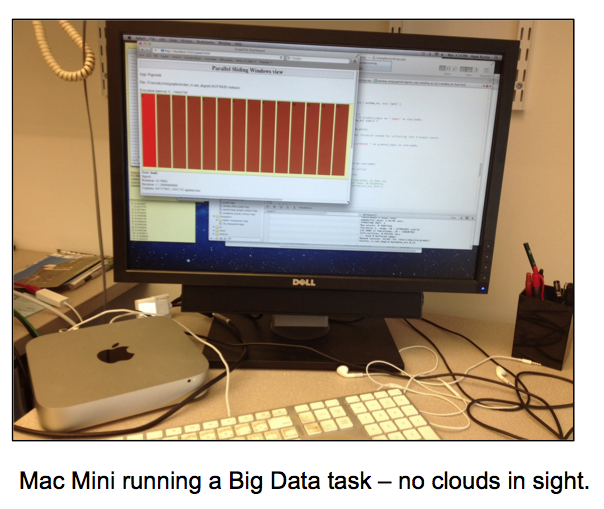 Aapo's GraphChi system enables to run graph algorithms on graph with billions of edges on a mac mini computer. It is an out of core computation which makes online passes on the data from disk (without reading it fully to memory). If you are interested in learning more - come to see Aapo's demo at our GraphLab workshop.

Read more on GraphChi
Posted by Danny Bickson at 8:03 PM No comments:

Here is a very interesting blog post by Ryan Rosario about some viable alternatives to Hadoop.
Thanks to Mohit Singh, our man in One Kings Lane for the link.
Posted by Danny Bickson at 10:14 PM No comments:

I got a link to this lecture from Matthias Broecheler. It looks like a very interesting new graph database. Anyone who is interested to learn more about Titan is welcome to our GraphLab workshop where Matthias will present Titan.

I just heard from Andy Krasnow - the ultimate head hunter about this contest. Here is some interesting information from their press release (text marked in bold by me)

YarcData is holding the contest to showcase the increasing applicability and adoption of graph analytics in solving Big Data problems. The contest is also intended to promote the use and development of RDF and SPARQL (both standards developed by the World Wide Web Consortium) as the industry standard for graph analytics.

Well what is the best software for doing graph analytics?? :-)


An update- I have contacted YarcData, and they will be presenting a poster about their contest in our upcoming GraphLab workshop. Thanks to Venkat Krishnamurthy for setting up the connection.
Posted by Danny Bickson at 10:20 AM No comments:

I got this email from David Lexer:

I'm currently learning Mahout (e.g. - 'Mahout in Action') and discovered your Blog.  Cool!
Question (if you don't mind too much):

I just finished the lectures from 'Learning from Data' @Caltech and am in week 8 of  'Machine Learning' @Stanford/Coursera.
http://work.caltech.edu/telecourse.html
https://class.coursera.org/ml/class/index
Neither course discussed the 'AUC' metric for classification.
Do you use it?  What's the mathematical basis?
Thanks in Advance,
-Dave


My answer:
I am not using AUC so often, but I find it useful for cases the prediction is binary (0/1) and you need to estimate your prediction accuracy.
Another example where AUC is useful is in this year ACM KDD CUP 2012, track 2 they used AUC to evaluate accuracy of predicting CTR (click through rate) of ads. They recommend the paper ‘ROC graphs: Notes and practical considerations for researchers‘ by Tom Fawcett as a good resource for learning about AUC.


Some more detailed explanation of AUC is found here,  along with a few more references.

By the way, if we brought up KDD CUP track2 this year, in a few days I will have some interesting news to report. As for now I can only hint by showing this image:

Stay tuned!
Posted by Danny Bickson at 11:37 AM No comments: