I got this from Timmy Wilson, our man in Ohio and a power Graphlab user: 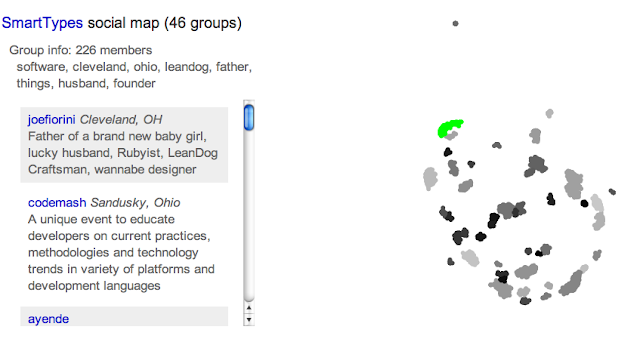 you need an html5 compliant browser to see/interact w/ the visualization.

The social map represents twitter links and cluster together users who frequently interact.
I was interested to learn which algorithm is used for performing the clustering, and here is what I got from Andreas Noack, the creator of the linloglayout package:

The algorithm resembles force simulation algorithms from physics, though not exactly spring relaxation. I have not published a description, but it is similar to the FADE algorithm, which again is based on the Barnes-Hut algorithm.

While the social map activity does not currently use GraphLab, previously Timmy used GraphLab for performing community detection in twitter social graph. He also contributed some datasets to be played with. Thanks Timmy for the updates!
Posted by Danny Bickson at 12:12 AM