Recently an interesting paper named distributed convex BP was published in CVPR 2011. I asked Alex Schwing (ETH Zurich) to give a brief overview of convex BP and his paper.

What is convex belief propagation?

What are counting numbers?


Counting numbers specify how often entropy terms for different subsets of variables are counted in the entropy approximation used in the energy functional.

If I need to read one paper about convex BP what should I read?

What are the applications for convex BP? 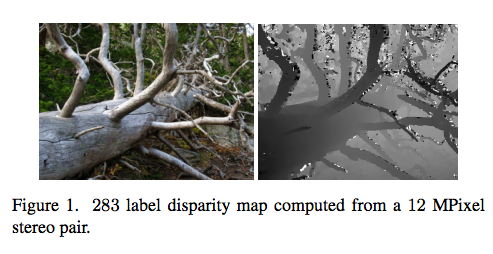 
Distributed convex belief propagation (dcBP) is an inference algorithm that allows the user to partition the task (graph) and solve the sub-problems independently and in parallel on distributed memory compute environments. Efficiency is improved by partitioning the computation onto multiple cluster nodes/machines connected, e.g., by a standard LAN. Most importantly, convergence guarantees of convex belief propagation are maintained by occasionally exchanging information between different machines and efficiency is improved due to additional computation power. Within the paper we compare the distributed computation to a non-distributed version and we observe an improvement almost equivalent to the number of additional machines (as expected). We also show that it is important to reduce communication overhead between machines, even when working on a very common 4-connected grid-like graph. We also compare the algorithm to loopy belief propagation and other message passing implementations.

Posted by Danny Bickson at 1:28 AM